Hi
to the whole team,
thank you for the code. I viewed the film - and I was terribly disappointed.
I'm sure that Garry was a honest and sincere person.

But if he started such a huge project with so many people then he and the rest
should have collected better information. Instead you're displaying a lot of
fake news that I myself on my blog * as well as my companions with their blogs and alternative newsletters as GlobalResearch, Counterpunch, Countercurrents, InformationClearingHouse, ConsortiumNews and so on and so on are trying to turn right side up again.

Some examples: it was the USA who cut off Japan of its oil supplies = thats a declaration of war! On top of it - everybody knew that Japan would attack Hawai, because the US had cracked the Japanese code. And just like in 911 the USA president Roosevelt sacrificed THOUSANDS of his own people. Shrewd as he was he sent some of the oldest ships to Hawai. But the mariners were not that old.

Churchill is praised one of the biggest war criminals ever. He started with his friends the Boer War, installed Concentration Camps where thousands of women and children died. He was instrumental in starting WWI and not the German Kaiser (read "The Secret Origins of the First World War" by Gerry Docherty & Jim Macgregor).

It is known today that he was "after Hitler the individual most responsible for WWII". See "Churchill And The “Unthinkable”(www.countercurrents.org/hemming301114.htm)

You're praising the EU  even though a large majority of the Europeans are not in favour of it even hating it. In addition none of the top leaders has been elected by the people but are receiving astronomical wages.

But most disgusting is that the film displays a fundamental anti communism. It's incredible that you are showing the shameful fake picture from BEIJING with that guy in front of a tank! It was known from the beginning that there was NO MASSACRE. And about two years ago a very well-known US- journalist had publicly admitted that he had been at the place and had not seen a massacre. But it was not shown on the front pages of our independent mainstream news.


The fall of the wall was a REVOLUTION! Hahaha. Go and tell that the people in Eastern Germany! It was a counterrevolution just as Khrushchev's revolution
has been. But nevertheless the Russians let all the countries go without a shot. 300 000 soldiers from Eastern Germany alone!

Can you tell me one such US-example? No, where the US set their boots they are coming to stay for ever. Look at Germany, at Japan, at Korea etc.

Oh, I nearly forgot the most important thing. Are we not observing during the recent decades a heavy campaign for a ONE-WORLD-GOVERNMENT under the hegemony of the US quite naturally without borders, with ONE LAW and ONE CURRENCY - the moribund dollar. I'm sure that Garry and the other filmmakers didn't mean that but they use the same slogans. That's not good!

This film  is a big fraud and deception in the same manner as OBAMA with his "YES WE CAN". ( HE WAS BEST IN BOMBING and DRONING.)

To you I'll give the benefit of the doubt. For sure you too have been deceived. By whom?

* https://einarschlereth.blogspot.com for justice and peace (it got dozens of millions hits and is read worldwide with lots of readers in the States as well as in Canada too) 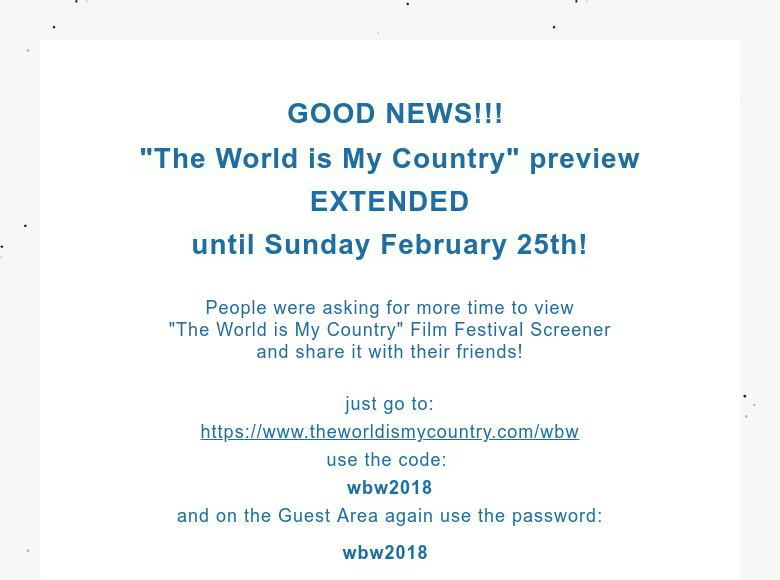