Thomas C. Mountain based in Aritrea is the only Western not embedded journalist writing excellent articles on Africa. Here follows his article from 2011-07-19: 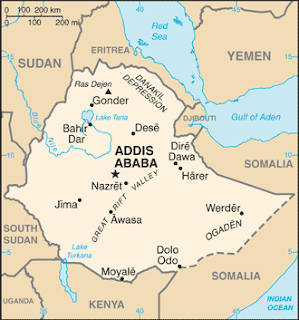 Map of Ethiopia with Ogaden and Omaria
around Dolo Odo

As predicted crocodile tears have begun to run down the faces of the likes of Anthony Lake, CIA director nominee turned Executive Director of UNICEF, as some 15 million people starve in the Horn of Africa. Tony Lake appeals to the world for tens, no, hundreds of millions of dollars to save the starving people of Ethiopia and Somalia, never once telling you that the majority, some 10 million, are in the Ogaden and Oromia regions and being subjected to a western funded food aid blockade by the Ethiopian military.
Another five million people, maybe more, are starving in Somalia. The heads of the western food agencies are loath to admit that a million or more of those starving are refugees created by the UN funded Ethiopian and AU armies invading and occupying Somali since 2006. The very same refugees who had their minimum survival rations cut by 70% by the likes of Tony Lake due to “funding shortfalls” before all the crocodile tears began to flow. 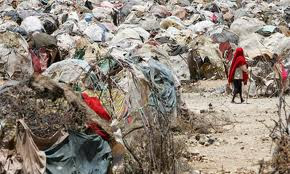 Since 2008 and the defeat and withdrawal of the Ethiopian army which invaded Somalia in 2006, the UN and its military wing in the African Union have intervened directly in the “war on terror” in Somalia in the form of some 10,000 troops, mostly from Uganda.
In the past 3 years the UN/AU army has laid waste to over half of Somalia’s former capital of Mogadishu. Some 30 square miles of Mogadishu have been pretty much obliterated by heavy artillery, mortars, tanks and helicopter gun ships operated by the Ugandan army. In the last 3 years some 500,000 or more Somali residents of Mogadishu have had to flee for their lives due to the relentless UN/AU offensive, joining the half a million refugees created by the Ethiopian invasion. 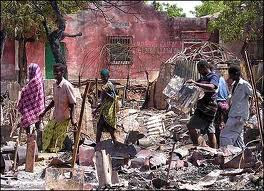 The drought ravaging the Horn of Africa is already four years old and has developed into the worst drought to hit the region in 60 years. With the onset of drought in 2007 came the onset of a major counterinsurgency in the Ogaden region by the Ethiopian military, marked paid in full by the western aid and financial institutions.
And with the counterinsurgency came the need to cover up this crime and so the Red Cross and Doctors Without Borders were expelled. Out of sight, out of mind is the slogan today for most of the international media with no camera crews, no journalists, no news at all if they can help it about the 10 million facing forced starvation in south east and south west Ethiopia, the Ogaden and Oromia. The last journalists who tried to get into the Ogaden, two Swedes, were sold out by the Somali Puntland warlords, ambushed by the Ethiopian para-militaries, their escorts slaughtered, with both journalists wounded and thrown into an Ethiopian dungeon, a message to all and wide to mind your own business when it comes to genocide in the Horn of Africa.
So the crocodile tears will flow and hundreds of millions of dollars supposedly meant to feed millions of starving people in the Horn of Africa will once again end up paying for the Ethiopian military’s latest arms purchase or in the western bank accounts of Ethiopian P.M. Meles Zenawi and his cohorts. And for a while the international media will churn out stories filled with heartbreaking images of starving children in the Horn of Africa and never once tell you how some 10 million of these people are suffering from a western funded food aid blockade.
The original article was published here.
Thomas C. Mountain can be reached under thomascmountain at yahoo dot com